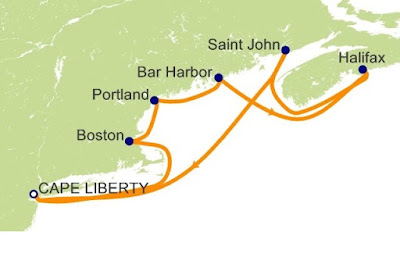 I have been at an 'Anthem of the Seas'  9 Night Canada and New England Cruise from Cape Liberty, Bayonne, New Jersey from September 22 to October 1st 2016.


In Boston we did the 'Freedom Trail' and Hop-on/Hop-off on our own while we bought ship excursions for Portland to Kennebunkport, Bar Harbor, Halifax  to Peggy's Cove and Whale watch and for Saint John the Reversing Falls and St. Martins tour.

See the short video from our cruise: 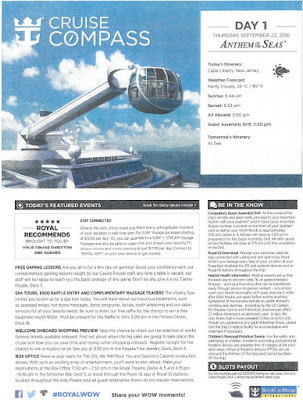 As you Depart information

Please report  if any 'broken links'. Request for more information is also welcome.

Anthem of the Seas - Tour of the Ship and Cabin Video

Posted by Mogens Hallas at 1:41 PM

Back to Cape Liberty and Departure 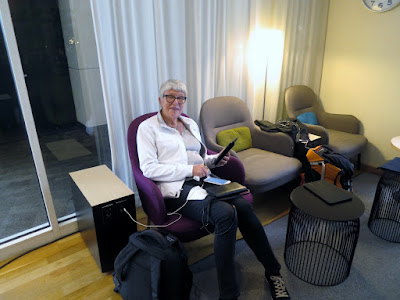 The last day of the Cruise.
Arrived at Cape Liberty Cruise Port in Bayonne at 07 am.
At 8 am we got breakfast in the Windjammer Cafe and waited so that we could go ashore. Immigration was very slow and we left the  ship at 10:30 am. Then it took 30 minutes to get our suitcases and get through immigration.
This is the third time we arrive by cruise to Cape Liberty, and we have not yet found out how transfer to the airport operates. At last we found the transfer bus, which drove us to Newark. 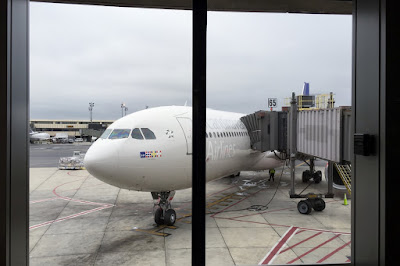 We had a little wait before check-in opened. Quickly through security and to the Scandinavian Airline (SAS) lounge where we got a late lunch.
At 5:35 pm SK910 was ready to leave for Copenhagen. A flight of 7 hours 35 minutes. Once again we were fortunate to be moving forward in the plane to the 'Plus'. Giving a little extra width and legroom.
Posted by Mogens Hallas at 2:23 AM 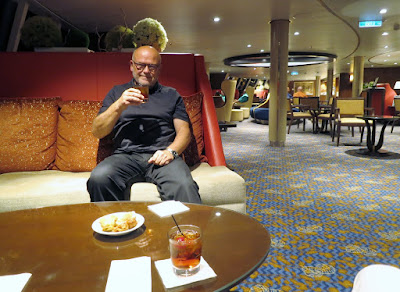 On our way from Saint John back to Cape Liberty Cruise Port - a trip of 36 hours. The weather has deteriorated - rain and more wind.
At 1 pm we were on the bridge. Unfortunately, Captain Henrik not on duty. We were guided by the Swedish female second officer.
After the visit to the bridge we went in Two70 where there was 'Captain's corner', where it was possible to ask questions about the cruise and cruising in general- quite entertaining.
Before dinner we got a 'Manhattan' in the Concierge Lounge and then dinner in the Windjammer Café - Mongolian barbecue, cheese and a little dessert.
Bags packed and placed outside the door at 10 pm.

Photos from the bridge with our Swedish second officer 'guide'.

Posted by Mogens Hallas at 2:24 AM 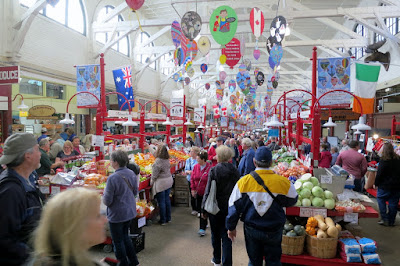 We arrived in saint John, in the province of New Brunswick at noon - we had to wait until it was high tide, before we could sail into the harbor. Saint John is the place in the world with the greatest difference between the low and high tide - a total of 16 meters (50 feet).

At 1 pm we went on an excursion which included the Reversing falls and St. Martins Sea Caves. We started the tour at the City Market, a covered market, built in 1870 with local goods. Continued on to "Reversing Falls", where Saint John river flows into the Bay of Fundy. Because of the large difference in the tide runs large amounts of water into the Saint John River from the Bay of Fundy, when it is high tide. When the tide falls after 6,5 hours (low tide) the large volumes of water with great force back from the river to the bay - flow is changing so every 6,5 hours. 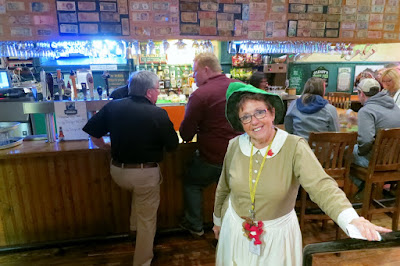 The tour then went to St. Martins, a small fishing village about 50 km (31 miles) north of Saint John. Also here there was a big difference between the tide and the fishing boats were in the harbor standing on the seabed.
We ate clamp chowder (soup of fish and shellfish) at a restaurant in St. Martins, Sea Cave - an area where the water has made big caves in the cliffs. Here we also saw the typical covered wooden bridges.
On the way back to Saint John and the ship we did stop again by "Reversing Falls" to see the water running back into the Bay of Fundy. The trip ended with a local beer at an Irish pub.
When we came back to Anthem of the Seas she lay much lower in the water Dinner in Restaurant Silk - spring rolls for starters, roasted duck for main course and a 'green tea cake' for dessert. It fell not to our taste so we got some strawberries with chocolate.
We had to wait until 10 pm before there was enough water in the harbor that we could sail away.


A short video from our day in New Brunswick

... and some pictures from the day:


A short video from our day in Saint John:


Pictures of Anthem in the port of Saint John:

Posted by Mogens Hallas at 2:25 AM 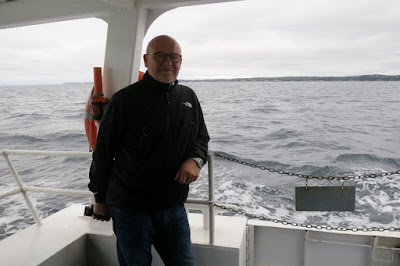 Arrived in Halifax at 07 am and already 07:30 am, we were on the road on tour.
Today's first excursion went to Peggy's Cove, a very charming little fishing village south of Halifax. At the sea the light house and the small port was lobster boats and lobster traps on the wharf. The houses were in different color because the color was originally the family emblem when the boats come in with their catch. We drove along the coast, where there was some little fishing villages in the protected  bays.

Back on the ship, there was just time for lunch before the day's second excursion - a 'whale watch trip "- it was considerably more watching than whales !. We saw the  heads a few gray seals. The whales had traveled south for the winter.

For the evening we had dinner in restaurant Chic - - 'gravad lax', Chicken Masala and hazelnut cake / apple pie with ice cream - served by our South African servant, Jo Anny.


A short video from Peggy's Cove: 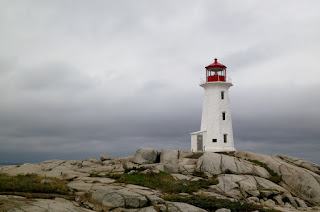 Here is an album of pictures from Peggy's Cove:

Link to pictures.
Or click on the image to view all photos.


Some Photos from Peggy's Cove:
Posted by Mogens Hallas at 2:26 AM 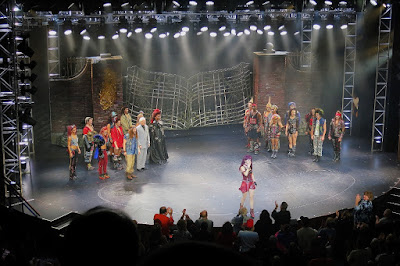 On our way from Bar Harbor sailing south of Bay of Fundy and Nova Scotia to Halifax.
After 5 days of sun, we passed through a rain area, but it was not blowing and the sea was very calm.
The day went with reading. In the afternoon we saw a musical in the theater - "We will Rock You" based on the music of Freddie Mercury and Queen - great setting and good music. Late in the afternoon we were in the Fitness.
Dinner at the Grande. A vol-Au-vent with shellfish for main lobster and dessert valrona-cake and ice cream. Pictures below.

Posted by Mogens Hallas at 2:27 AM 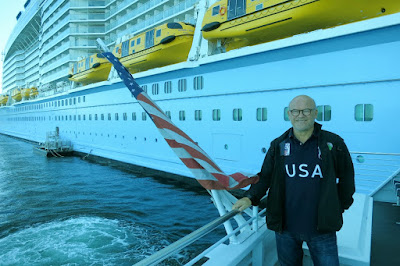 We arrived in Bar Harbor on Mount Desert Island in Maine at 7 am.
A splendid entrance between the many small islands and thousands of lobster traps marked with white buoys.

Bar Harbor is a tender port - we sailed into the harbor in small local tender boats (see video from tendering below).

Today's excursion was to Acadia Nature Park, covering the majority of the island. We drove from Bar Harbor to the south along the rugged rocky coast and through dense forests to the top of Cadillac Mountain, where there was a nice view over the island. 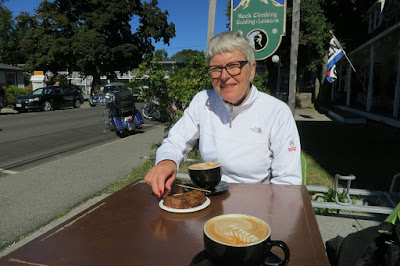 Back in Bar Harbor we got a cappuccino at a cafe. Walked through the town and along a path along the water.
In Bar Harbor is a huge difference between the tide and at 1 pm Bar Island was mainland with Mount Desert. We walked on a sandbank to the island - back in Bar Harbor, we took the tender boat to Anthem of the Seas.  See video from the day below.

We enjoyed a glass of wine in Vintage Wine bar before dinner in the Chic - the menu's best choice was the lamb shank - A goat cheese for an appetizer and New York Cheese Cake for dessert. And we had a fantastic waiter in Jo Anny from South Africa.


A video from our day at Mount Desert island.

Posted by Mogens Hallas at 2:27 AM 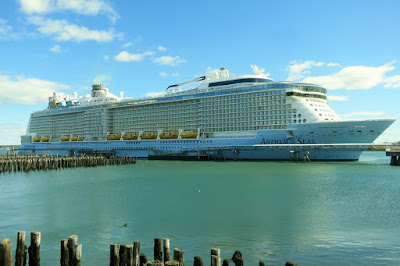 We sailed into Portland at 7 am - a beautiful entrance between many small islands.
At 8 am we went on tour - had ordered a half-day excursion to Kennebunkport, which is a historic ship yard and fishing village about 40 km (25 miles) south of Portland. We had hoped to see forests of maple trees that were beginning to be red, but unfortunately the weather had been hot lately, so most trees are still green.
We started the visit to Kennebunkport at the Dock Square at the Kennebunk River. We walked around and saw the many beautiful houses (colonial style). At 11 am we drove along the water to Walker's Point, former President George W. Bush's summer home. Unfortunately we could not stop. The flag was hoisted, so Bush was in his 'home'. 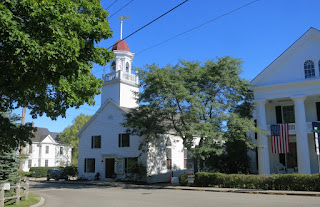 Link to pictures from Kennybunkport
or click on the image on the left.


Watch the video above from the Kennybunkport excursion. 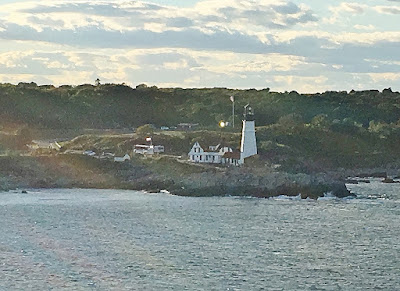 Back to Portland where we went for a walk in the city - unfortunately, a large part of the original town with wooden houses burned and at rebuilding has made with wide roads. Back on the ship for a late lunch in the Windjammer Cafe and Cafe followed by a Cafe Latte in the Concierge Lounge.
When we left Portland we sailed a little to the south to pass the Portland Head Light (lighthouse).
More follows ...

Posted by Mogens Hallas at 2:29 AM